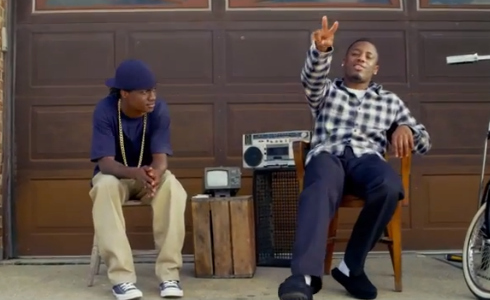 Audio Push is a band from California, known for their dancing skills they released their « Teach Me How to Jerk » to be a monstrous success in the U.S. and the tendances was launched JERK!

So far nothing extraordinary level hiphop, fashion Jerk past the group falls a bit into oblivion until HIT BOY famed producer who we owe « Niggaz In Paris » by Jay and Yeezy and that « Goldie » Asap Rocky decides to take him under his wings.
Hit Boy has affiliated Kanye West and GOOD MUSIC to « last year has decided to leave home to take care of his group fully protected AUDIO PUSH.
A gamble at the time but that seems more promising than today saw how the two artists have progressed and are now regarded as the group rises and monitor much without saying anything, because Hit Boy give them rigor with which the young artist full of talent do not always evidence.
Everything starts more seriously in 2012 with their first project 100% produced by Hit Boy « INNELAND EMPIRE who for sure will make you jump, scream, dance to that received very good reviews especially rare What time are those that produce this kind of atmosphere (like Tyga).

In 2013 they released their new mixtape« COME AS YOU ARE » that is a marvelous, the group is more diverse and comprehensive, it contains all kinds of atmosphere and we feel this project through constant artistic evolution of the group, so in 2014 they part of « artists to watch » list of the greatest hip hop references (such as YG, we saw the result ..)

I HOPE YOU ENJOY THIS SHIT !